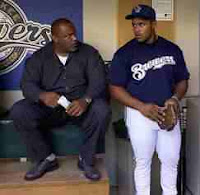 The Detroit Tigers and Prince Fielder have agreed to a 9 year deal, worth a reported $214 Million. The contract would average around 23.8 Million per season.

The signing by the Tigers was not expected by most news outlets.
Fielders Father, Cecil Fielder played for Detroit for 7 seasons, when Prince could be seen in the Tiger’s dugout as a boy. Fielder had been rumored, to have been linked to the Nationals, Rangers, Cubs, Mariners, and the Dodgers recently. Scott Boras, Prince Fielder’s agent, reportedly was seeking a 10 year deal, for his client.