Milwaukee Brewers a Recipe of Memories

The Brewers start spring training on February 19th, with the Pitchers and catchers reporting first. The Position players report one day later on Monday the 20th.
The 2012 Brewers season, I think looks to be an exciting, and winning season, again this year. There will be obstacles which every team deals with, but the best organizations can overcome the glitches to stay on a winning path.

Mark Attanasio, and the ownership group, have a vision for the team. As a fan, we can see the confidence the players have on the field, and in the dugout. The Attanasio family are visible, approachable, and attend many games, leaving those in attendance a feeling of attachment to the Milwaukee Brewers.

The Experience in Miller Park, and the tailgating, makes for life long memories. The marketing of the Brewers is remarkable to see the younger kids enjoying a ball game, brings back allot of memories. The technology that the younger generation has today can be a distraction, but seeing them at the ballpark is awesome.

I have many memories of attending Brewer games, one that stands out, was way back in 1970, September 16th a Wednesday; my grandpa was visiting us from Prairie du chien, and the brewers were scheduled to play the Oakland Athletics at Milwaukee County stadium. The plan was for my parents to take my grandpa to the game, being the game was to start at 8:00p.m. and a school night, I was not able to go. My Grandpa seeing my disappointment, said to my folks "if Mark isn’t going I am not going" and as you can guess I was able take in that wonderful experience, one you never forget. 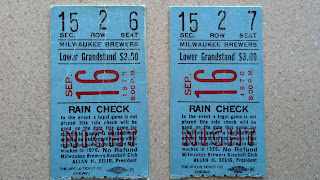 I still have an official scorecard, cost .25cents, and my ticket stubs, Lower Grandstand, $3.00.
I am starting to get the fever writing this after a few tears, reliving the 70’s.
Please share a memory of yours if you would. Let’s go Brewers, Let’s go Brewers.
You can sign up for opening day tickets, a lottery system here!

Posted by brewersnpackers at 10:28 AM